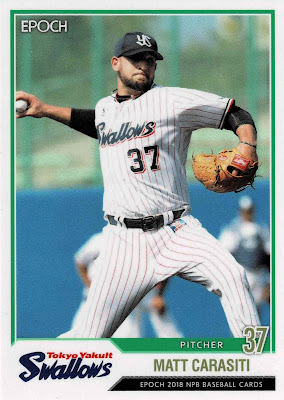 I've told you all the story of how I came to collect Matt Carasiti's baseball cards, right? Basically, this guy was a pitcher in San Francisco Giants spring training last year - just before the pandemic - and I heard him interviewed on KNBR's Giants broadcast & came to think that he might be one of the most inspirational nice guys in sports. That's it. That's why. He then proceeded to get hurt; was out for the year with Tommy John surgery; came back to the Red Sox organization this spring; didn't make the bigs; and is now on the Worchester Red Sox - but hurt again. He has not pitched in 2021. I do hope he pitches again.

One thing I liked about that interview is that he told some fantastic stories of trying to get his pitching career into gear by playing in Japan for a couple of years. He moved his wife out there, and they fell in love with the place. Japan'll do that to you. I've been there a few times myself. After that stint, the Giants brought him into camp, and then things went sideways. Anyway, I really only have 4 more cards of his that I need before I have everything with his picture on it.

This first one's a 2018 card put out by Epoch Sports, with Carasiti pitching for the Tokyo Yakult Swallows. The one you see below you is also from 2018, and is put out by Baseball Magazine, aka BBM. Here's to Carasiti - very much wishing him a path back to the majors, and/or eternal peace and happiness otherwise. 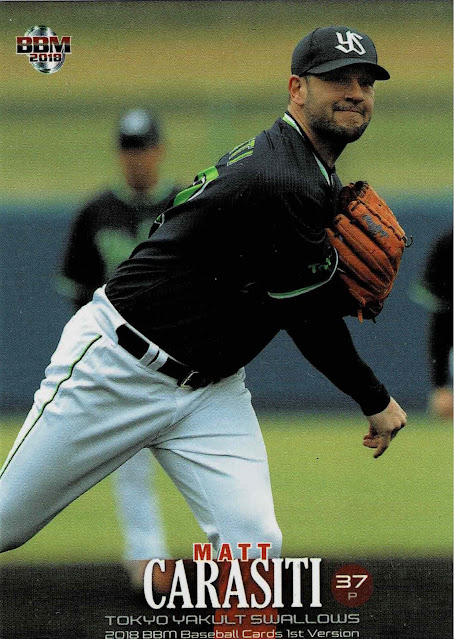