An LCS Repack - Miles Better Than a Walgreens Repack 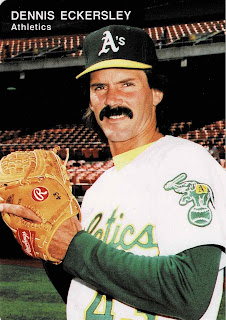 So last post we talked about a 'lil visit I had to Lefty's Sports Cards last week. I'd kind of ignored their custom repacks the other times I'd been there, having not looked at what they were selling them for, and assuming they'd probably be all the 80s and 90s junk wax stuff I can't stand.

Well pardon me! Here's what they did. Yes, their 25-card custom repacks are stacked with '87 Donruss and '90 Topps and '92 Upper Deck and whatnot. Between 15-20 cards in each of the THIRTY-THREE PACKS that I bought were like this. Jay, you're saying - "Jay, why did you buy 33 packs of cards?". Because it was $15 for 30 packs! And because the packs were wrapped in clear plastic, you could easily see 2 cards - the "front" and the "back" card - in each.

My feeling was, if those 2 cards are worth 50 cents to me, and/or can easily be traded to folks who might like 'em, then let's go for it. Sure - of those 825 new cards I got, 700 of them are now in a special "give it to the Goodwill" box. But among the other 125 there were some corkers that I'd like to share with you now.

Well, there's 1992 Mother's Cookies Dennis Eckersley, for one. There's no shortage of Mother's Cookies cards hanging around the SF Bay Area card shops, and this was one of several Oakland A's fellas I got in these packs.

I'm always up for new cards in those late 80s/early 90s "Baseball Legends" sets that Pacific put out. I'm trying to collect the 1990 set they did, but they're all great - as is this Johnny Bench card-on-card from K-Mart's 44-card set from 1982.

Hey, speaking of cards on cards, here are three from those late 80s Topps "Turn Back The Clock" sets that were part of their flagship.

Two players I happen to be a big fan of - Tim Salmon and Paul Goldschmidt, the latter of whom I think I may slowly becoming a collector of. This is a 2016 "Topps Update Team Franklin" card, #TF-5.

Three legends. Of course I dig the Lance Berkman the most - it's a 1999 "Team Best" minor league card from when he played for the New Orleans Zephyrs.

I am NOT familiar with the 1992 Ziploc series of cards, but once I saw this Rollie Fingers card, I knew I needed to be. The other two are just cool quote-unquote vintage cards that I knew I needed....the 1977 Bert Blyleven was certainly a card I had when I was a kid.

Not much to say about these 3 rows here, except that they're keepers.

A 1988 Sportflics card! You kind of get the two 3-D Don Mattingly photos blurred together in my scan here. The Ichiro card is kind of a trip because it definitely has a Willie-Mays-in-1973 vibe to it. All-time Top 10 favorite player of mine.