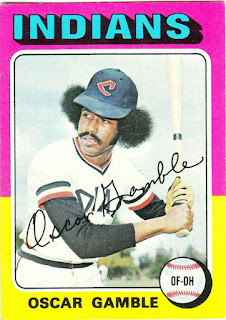 Hey everyone - certainly been a while since I made much of an appearance in this space. I'm still collecting the cards, you know, but I had a bit of a reckoning in late 2021 that's sort of shaped how I'm collecting going forward. This hobby, as I'm sure many of you've figured out, can be a bit addicting. One set that needs to be completed begets another set that needs to be completed. One admired player turns into a need to collect that player's entire history of cards. One favored team means that any card from that team needs to be collected. And so on.
Thus, I took stock of it all and pretty much decided to jettison that way of thinking. Here's what I don't collect and accumulate any longer:
The focus for me is on those Topps baseball sets from 1965, 1971, 1972, 1975 and 1976. Yes, 1976! I actually added that one, to help make up for all the stuff I subtracted. And I've got a long way to go for all of them. As mentioned in previous posts, I've been inexpensively selling off most everything else in these $5/each packs on eBay - you're welcome to order one or ten here.
The mania hasn't gone away, though, and I'm okay with that. I recently went to Average Joe's Sports Cards in Buena Park, CA on a trip to Southern California and burned a deep hole in my wallet filling in some 1972 and 1965 wants. So, so fun. I then dialed them up and had them make me a paid care package of 1975 and 1976 commons to get those collections up and running. And I've been sniping Pablo Sandoval rarities off of eBay, COMC and Sportlots at will.
So I'm still very much in the proverbial game, it's just a different game than it used to be. "Sort of like baseball itself".
Posted by Jay at 7:41 AM 5 comments:

25-card Vintage Packs for the People 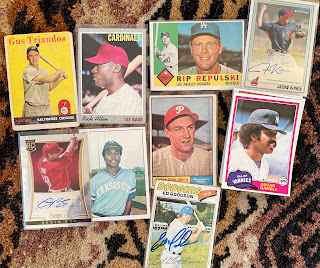 I reckon that every collector needs to make some adjustments and recalibration to their collecting strategy in order to keep their homes from being overrun and their wallets depleted. For me, that's meant backing off from collecting every card from the 60s and 70s that I could get my hands on; stopping the unending push for prospect cards and to quit collecting the cards of 25 different players in order to truly focus on one or two.

As mentioned before, this has me unloading some cards in 25-card packs. I think it's a hell of a deal, to be honest. Here's what my "25-card vintage packs for the people" include for a mere $5 plus shipping:

It's a great way to get 25 surprise cards spanning the 1950s to today at a low price, including stuff that's pretty tough to find. I collected many cards over the years, and am pruning back my collection this way and making sure they get to a good home. And hey, who doesn't like surprises?

Check out my eBay listing here. 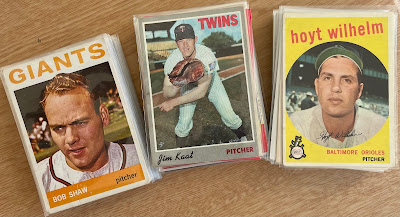 Hey folks - my break from the blog allowed me to figure how I want to proceed with collecting in the new year, and I think I've figured it out.

My want list has been chopped back quite a bit, and I'm unloading a bunch of cards in 25-card packs full of vintage, autographs, modern and more! Each is only $5, and it's a great way for me to start fresh and focus on 1965, 1972 and a few other things while making sure that some of the cards I've accumulated over the years go to great homes. Take a look!

Check out my eBay listing here.