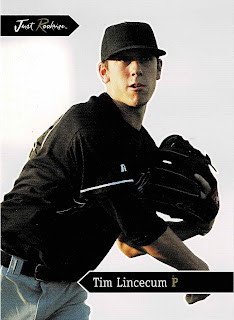 When pressed, I tell people my two favorite baseball players of all time are Pablo Sandoval and Tim Lincecum. This is somewhat odd, because neither is at all associated with my youth; both came along to the San Francisco Giants as I was heading into my 40s, and yet both played with some joie de vivre and panache - and helped lead us to three World Championships - that, well, why wouldn't they be?

So there are the two baseball players whom I've decided to collect the "hardest". Just today we had a mail day that brought it two new Lincecum cards. The first is this 2006 "Just Rookies" card that you'd think would be some ultra-rate collector's item, but which I just procured for $1.99 off of eBay. I'm not too familiar with the Just Rookies brand, but there are a million of these on eBay. It is now my earliest Linecum card. I suspect any of the others from 2006 will be a little more difficult to come by.

The other one is a 2007 Topps "Moments and Milestones" card, numbered 02/25. Again, way cheaper than it should have been. In this case, not complaining. I have quite a ways to go before I feel like I'm truly getting there w/ a world-class Linecum collection, but these two get me that much closer. 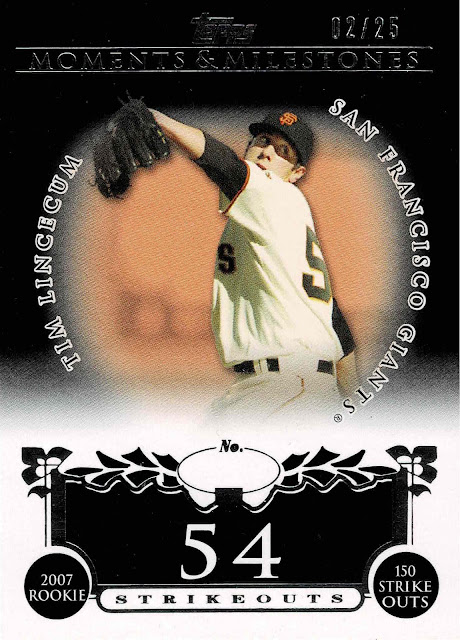