Another Little Piece Of My Uniform 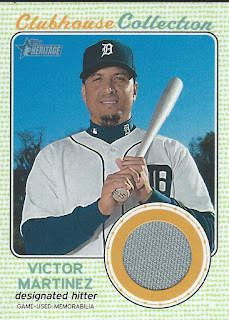 I'll admit it - I'm already suckered into collecting bits of used player uniform stuck into insert cards. They got me. Assuming that it's all real, it's the most tangible connection any of us are going to have to the professional ballfield aside from our yearly visits to our respective FanFests. "Game-used" - and hopefully "post-game washed"?

When I bought my 2017 and 2020 Topps Heritage hobby boxes - the latter just a few weeks ago now - I was anticipating the moment in which I'd tear open a pack and find a Trout or a Betts or even an Otani game-worn uniform insert. Perhaps it would be autographed. Maybe I'd be sunning myself in Bora Bora right about now with that autographed Trout uni. 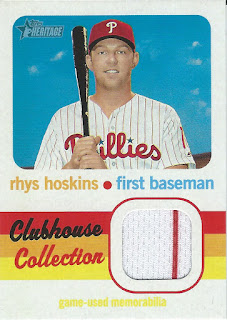 Hell, I'd even take a Dodger - Bellinger, Kershaw, whomever. Yet with all due respect to these guys, my two respective uniform inserts were probably the two lamest in the entire collection. Victor Martinez? Rhys Hoskins? Hoskins hit .226 last year. Martinez is now retired, but was total dogmeat in 2017 & 2018 before he bowed out. Hoskins may end up being a superstar - they say the kid's got talent - but man, I'll admit I was hoping to do a little better than this.

That said, having some lower-tier stars in these series is good for me overall. It's how I've accumulated a few Pablo Sandoval uniform pieces, even one during his infamous Red Sox days (not that there were very many of those). Pablo's my hero, and you'll be hearing a bunch more about him in posts to come. If Martinez or Hoskins is your hero, get in touch and we'll work something out.
Posted by Jay at 1:38 PM 9 comments: 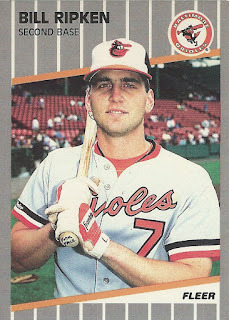 Even during the many years that I was not collecting baseball cards, there were a few cards I became familiar with via general social media osmosis or via blogs I've followed over the past twenty-ish years. Once I jumped back into the fray, there were a few of them that made my must-own list.

One is this 1989 Fleer Bill Ripken card. It's one of the most hallowed "error" cards of all time. There's an entire article about the thing here. Wait, there's an entire website about this card here. I've gathered that folks who couldn't care less about baseball cards absolutely love this one. And why wouldn't they?

The CNBC article says "First reports estimated that there were about 3,000 cards featuring the full obscenity, but it is believed that there were actually more than 100,000 of them that hit the market". Well, I have one of them now. Subsequent versions of this blacked out the bottom of his bat. How lame would you feel to only have one of those? I didn't want to be that guy, and got myself my own Fuck Face card while I had a few extra shekels in my wallet.
Posted by Jay at 2:01 PM 5 comments:

Joey Bart is On His Way 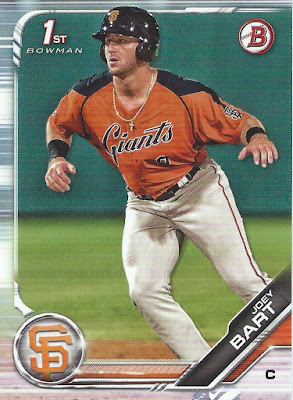 Well back in my day, folks, we (mostly) didn't have prospect cards. In the 1970s, minor league ballplayers would get occasional representation within team sets that might be sponsored by the local Piggly Wiggly or the Circle K, but the now-ubiquitous batch of cards being created for nonentities and potential breakthroughs really just weren't being made.

Once a player is drafted now, however, he's going to be documented six ways from Sunday on a variety of cards across a variety of brands. There's this kid Joey Bart you may have heard of. He's the heir apparent to Buster Posey at the catcher position for the San Francisco Giants baseball club. He's been a bit of a hitting monster at every level he's played thus far, and there's an outside chance he makes the 26-man roster on the big club this year - that is, if we get to play a season. (Those of you reading this post months/years from now need to think about what was going on globally in late March 2020, and then you'll understand the context). 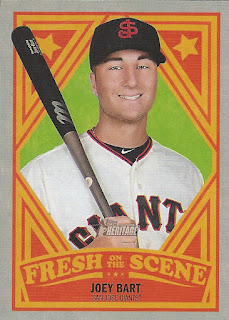 I've decided to get in on the ground floor of Bart-mania before it happens. These are the first two cards I've got of his, with a really big batch of others now on the way from COMC. I'll post a few of those once I get them. Of course, Bart may never make the bigs; he may flame out as a third-string catcher; he may be in the Hall of Fame thirty years from now. I've never seen him play so much as an inning, so I'm just speculating on the guy, as so many have speculated on player cards before me.

The 2019 Bowman card is something I found online, on eBay I believe, for not much money. There are many alternate versions of this card available to the buyer, and some of them are steaming their way toward me now. The 2020 Topps Heritage "Fresh on the Scene" card is very new, and I pulled it from a pack that came in a 2020 Heritage Hobby Box. The one prospect I cared to get, and I got 'em.

Hide the Cards, The Wife’s Coming 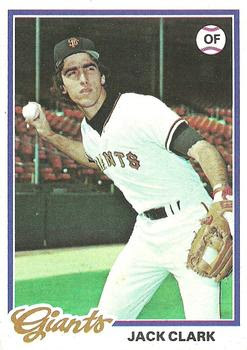 I’m one of the now-almost archetypal middle-aged males who has “returned” to the pastime of baseball card accumulation after several decades away from it. Let me just say that quite a bit has changed since the early 1980s, the last time in which I spent a sum of money on baseball cards, and a time in which I was 13-14 years old. (I believe I aged out of card collecting around my 14th year, which would have been 1981-1982, about the time that Topps was joined by Fleer and Donruss, and things got pretty hectic out there).

I totally missed the gold-digging craze that followed. I even drifted away from ravenous baseball fandom itself for most of the 1990s, coming back in hot when my beloved San Francisco Giants made a run for their first World Series championship in 2002. You may recall that they did not in fact win one that year, and that it took another eight years for SF to take the first of their three crowns. Well before that time, I was again the same baseball obsessive I’d been in my youth.

Having kept tabs a bit of the evolution of baseball cards during that time, I had a sense that once the speculation bubble had popped, there were new and interesting ways in which to engage with cardboard. Buying full boxed sets was out; collecting individual players or team sets or thematic variations of one’s choosing was in. This excited me. I got the sense that perhaps I could return to the unbridled collecting passion of my youth in any way, shape or form I deemed appropriate. I could spend mere pennies to create sets of my heroes; I could chase limited-edition special high-number varietals; I could buy cards that had slices of some dude’s uniform in them; I could sit back and do nothing at all. My choice. My rules.

With that in mind, I dove back in during this past year. My favorite player as a kid was Jack Clark. That’s his 1978 Topps card you see here. The ‘78 Giants were an absolute delight: in first place nearly the entire year, which happened to be the first year I really launched my mania for the sport. There’s a new book that’s partially about their season here. It truly was as exciting as author Lincoln Mitchell makes it out to be. Clark, Willie McCovey, Vida Blue and others nearly pulled off an epic dethroning of the hated Dodgers and the less-hated Reds in a year that they really had no right to be that good. My allegiance to these men and gods was forever cemented accordingly.

Thus, I started my collecting rebirth with a notion to collect some of my favorite players of all time:
Jack Clark
Pablo Sandoval
Greg Minton (yeah, seriously - we can talk about this in another post)
Rennie Stennett (same)
Ichiro Suzuki
Vladimir Guerrero
Willie McCovey


These are the sets I'm building up now, among others. As much as I love the baseball team from San Francisco, I’ve also collected some Giants and non-Giants teams. I’ve bought random cards and packs and lots and whatnot. I’ll be sharing many of them here.

I sincerely hope you bookmark this site and come back often.