A New Trip Through the All-Star Cards Catalog 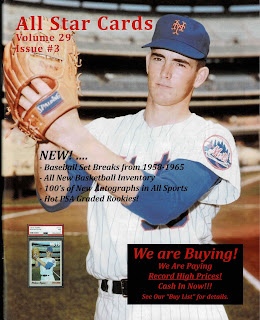 Every few months I receive a listing-packed catalog from All-Star Cards of Overland Park, KS. It's something I requested online last year and that I wrote about once before here. Every time I get one, it's a glimpse into a parallel world of card collecting - one that's pretty far away from me and my card-blogging brethren and I-don't-really-care-about-condition set and player collectors. I find it a little fascinating and a little off-putting at the same time.

If you're into paying top dollar for graded cards - and if the difference between a PSA 7 and a PSA 7.5 is super-meaningful to you, then you'll want to take a good look at this catalog. It's fun in that way. Me, I couldn't care less. The only time I get really excited about anything in here - I mean, aside from looking at images of cards I'd love to have - is when some ridiculous card that I probably have sitting in a trade box (a 1980 Tony Perez on the Expos!) is selling for something so absurd it just defies logic (in this case, a PSA 10 of that card will cost you $199.95, as opposed to the 35 cents it'll take to buy an ungraded version here).

Do people really do this? They do, don't they? I don't know anyone who does, but they seem to be making the rounds at the few card shows I've gone to, and they definitely love to bro down about baseball card values and this week's most collectable prospect on Twitter.

The week this past summer that Shohei Otani started the All-Star Game and was the hottest thing in baseball, I went to a card show in Sacramento, and there were cases upon cases of his cards on display, many for $2,500, $1,500 and so on. Someone must be buying these, and I'm willing to bet they're also buying Bitcoin, GameStop and Truth Social stock. 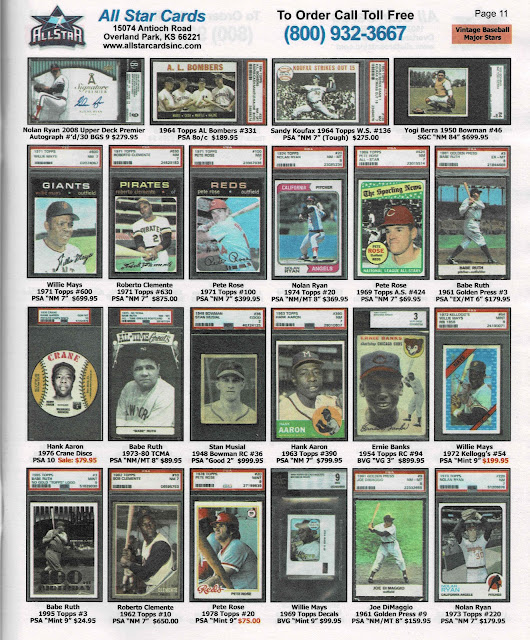 It's all really gross, if you ask me. Yet All-Star Cards aren't gross. They're just a business who are amalgamating many valuable cards that they are hoping to sell for what the market will bear. It's as American as apple pie and Truth Social. Their catalog gives me a sense of what people are interested in this month, just as prices in a grocery aisle are pretty good clues to what's being valued in food consumption at any given time.

Request a catalog if you want to. Operators are standing by. 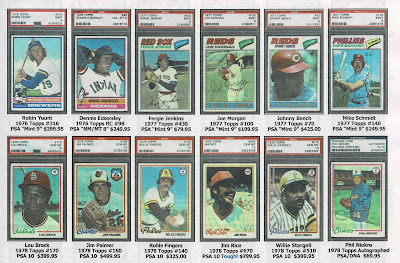