Who The Hell is Ted Simmons? 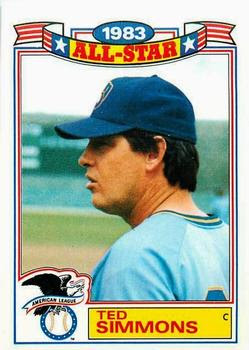 You folks might laugh at this one - how can this guy call himself a baseball fan - but until the past year, I barely had any idea of the baseball player Ted Simmons. I'm talking the Hall of Famer Ted Simmons. A catcher who was active and playing during some of my peak years of baseball fandom when I was a kid and teenager, yet who for some reason almost completely escaped my notice while he was playing.

I was vaguely aware that there was a catcher named Ted Simmons playing around this time - or was it Ted Sizemore?!? (answer: both, though the latter was an infielder) - but when I learned recently that this particular player from the late 60s/late 80s was being inducted into the Hall of Fame, and that there were several of you out there collecting his cards, I was like....who??

It's not like I wasn't watching every All-Star Game and postseason series back then. I was. I picked apart box scores; I read The Sporting News and Sports Illustrated every week - even Baseball Digest - yet Ted Simmons barely registered for me. It is difficult to keep track of 750-some-odd major leaguers each year for sure, but you think this guy would have cracked my consciousness. I wonder who I'm totally missing out on now.

In his 21 seasons, Simmons was an All-Star 8 times. Three of those were before the age I personally turned 10, so I suppose I can be forgiven for that. I guess once 1977 came around - he hit .318 with a .408 OBP - I was most tuned to whatever the Cincinnati Reds (the Big Red Machine) and Los Angeles Dodgers (Garvey/Cey/Russell/ Lopes) were doing, to say nothing of the New York Yankees, who were the main team being talked about that year, and pretty much most years during my youth.

Ted Simmons over in St. Louis didn't register against all of that, nor afterward when he was part of that "Harvey's Wallbangers" early 80s Brewers team that stormed the playoffs.....I remember Cecil Cooper, Paul Molitor, Robin Yount, Gorman Thomas...but Ted Simmons? Nah.