In Case You Were Wondering About 2021 Gypsy Queen 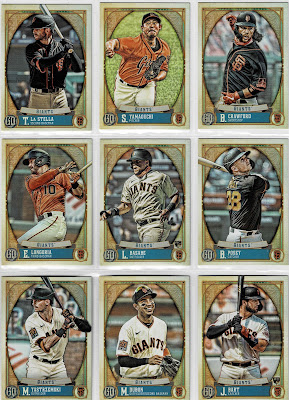 This year for Gypsy Queen, I got in, I got my guys, and I got out. Actually, that's not true - I don't have any 2021 cards for the players I collect, so I need to get on that. But here's what the series looks like when you collect a particular team, as I do.

Shun Yamaguchi and Luis Basabe - I don't even know who these "Giants" are. I guess it's kind of fun for Topps to take a flyer on a few unknown guys and give them a chance to get into a set, along with players we've actually heard of and that, you know, play in the major leagues.

Not much to say beyond that. It's a series that I like better than some other series - say, flagship - and man, I don't know what's going to happen to Gypsy Queen (and Ginter, and so on) after next year and all baseball cards start being made by someone other than Topps.