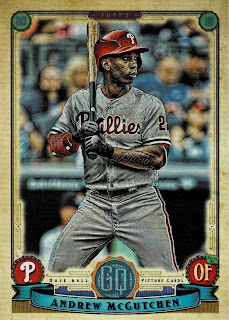 Hey folks - back after a bit of a refreshing pause over here at Card Hemorrhage. Not entirely sure what the reason for my relatively brief layoff was. I'll attribute it to a combination of factors.

1. A general sense that the somewhat intimate, dorky hobby of card collecting entered a strange new chapter, punctuated by Topps announcing an IPO and Target announcing that it was removing all cards from their shelves, due to actual violence in their stores and parking lots. This piece captures the whole sordid scene well. I don't collect that way - at all - but all of this mania is forcing even me to alter how - and how much - I'm able to buy going forward.

2. Some ennui after a pandemic-fueled 2020-21 year of extreme set building helped me to accomplish most of my early goals, more or less. I wanted to build complete San Francisco Giants team sets for the complete runs of Topps Heritage, Allen & Ginter and Gypsy Queen - and with the exception of some stragglers, I did just that. The 2019 Andrew McCutchen Phillies card you see here is a funny story. I've now ordered the SF Giants variation of this card (#77) twice, from two different sellers, who advertised that they were selling said Giants variation - and who then sent me the common card of McCutchen in a Phillies uniform. Refunds were issued. A new order was placed this morning from a third seller. Receipt of this card will give me the complete Giants Gypsy Queen team sets, 2011-2020.

3. Finally, having accomplished said goals, I wanted to maybe reassess what I'm truly interested in collecting going forward. I'm by no means just a Giants guy. Many PWE trades with many first-class individuals over the past 16 months has netted me a plethora of terrific Giants cards, yet there are only so many Brandon Crawford and Evan Longoria cards a man needs in his life. I also love colorful, great-looking cards of other players as well, guys like Shohei Otani and Max Fried and other players I don't collect, and I really like the complete vintage sets I'm working on: 1972, 1971, 1965 and 1967 Topps baseball. I'd done my reassessments, and I'm re-energized.

I'm working on figuring out what out of the many cards I've accumulated these past 1-2 years I truly want to hang onto, and what perhaps would look a lot better in someone else's hands. Then I need to figure out how to get it to them.

Anyway, great to be back here again, and I've got a few orders on the way and new card scans I'll be delighted to share with you forthwith and presently, starting tomorrow!